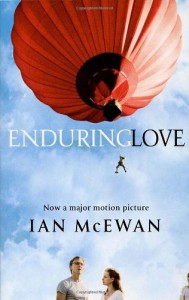 it's possible Ian McEwan is the acid test of contemporary British letters. first things first, he has a quarter-million reads here on GR for [b:Atonement|6867|Atonement|Ian McEwan|http://d202m5krfqbpi5.cloudfront.net/books/1320449708s/6867.jpg|2307233], and so he's part literary writer and part upper-level thriller scribbler, the thriller part being the underlying prime moving force for all the "plot twists" (read: 'incidents,' 'accidents,' or 'crimes' as you prefer) that mark (and critics decry about) his work. maybe it's just that at the 2 million copies mark you're an airport novelist? or is this all ass-backwards, and McEwan is the prototypical 'English literary novelist,' with deviations from his norm constituting the aspects of personality or education intruding onto lesser copies of the form? that might just in the end be a question of very fine hairs with even finer split ends...

how you discovered McEwan, and how deeply you're getting into his work is, I imagine, a literary genre of its own. for me, it was 2007, summer in New York, and the buses and bus-stops; the newspapers and magazines will all emblazoned with Keira Knightley's pensive face. I had just returned to the city after a spell deep in Asia, and suddenly having all this media and rich cultural opportunity was a sort of immersive experience in itself. I think I sat down for three or four hours at that member's library on Park Avenue just inhaling back-issues of New York Times. then I went out for black coffee in a blue-Greek paper cup and a poppy-seed bagel. it was new york.

for a lot of people, and justifably so, Atonement is decisive. its central device is something that sharply divides opinion,--> Possession by Byatt, only 4% one-star; On Chesil Beach 4%; All the Pretty Horses 2%; Sense of an Ending 3%. Atonement had no less than 8%+ of its readers despise the book, and many, I think, take strong issue with the 'thing,' as anybody whose has read the book instantly knows what I am talking about. I'm afraid I'm one of the critical crowd, and put aside McEwan for some years.

well, time has passed (six years, to be precise). was the book a failure because of the Device, or does it deserve respect for all the other qualities? this question led me to [b:Saturday|5015|Saturday|Ian McEwan|http://d202m5krfqbpi5.cloudfront.net/books/1348472398s/5015.jpg|2307189] (disappointing; confirms McEwan as weaker), but then to [b:On Chesil Beach|815309|On Chesil Beach|Ian McEwan|http://d202m5krfqbpi5.cloudfront.net/books/1178649691s/815309.jpg|1698999], a bit better, actually rather impressive, and then finally this work, Enduring Love which is a solid 4-stars-- and I can understand those who would call it five. its theme is darker--obsessive love, and as 'modern McEwan,' its set in contemporary rather than a more historical Britain, but it seems McEwan here found a metier. the book works; it hinges around an odd corner of the human psyche, but that corner does appear to resonate across time periods / cultures / groups of people. there is the allegorical underlay; the multiple readings ; the under-stated social critique. but instead of the neurasthenic surgeon-hero of Saturday or the mixed-reach-bag of Beach, perhaps arguably this is the best McEwan.

in any case, this has been a pretty long review, so I guess I'll let this one rest for now (or at least until re-read in 2 or 3 months time). time to track down other used / torn-up copies of McEwan

ps some sources are indicating McEwan is definitely intending a critique of religion here. hmmm... impossible to prove/disprove I imagine
Tweet